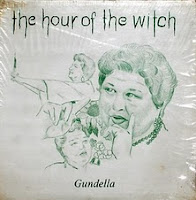 Despite living in the Metro Detroit area most of my life I had never heard of Gundella "The Green Witch" until George Noory mentioned her on his Coast to Coast program a few years back. He talked fondly about her presence in the community and it intrigued me enough to do a little research into her life.

Sadly, there isn't very much information about her on the internet and the available material is widely scattered and takes much searching. Hence, I decided to compile as much as I could in this blog for any curiosity seekers. This is not meant to be a biographical sketch of her life but more a gathering of information on a very intriguing lady. Any information or pictures you have and are willing to share would be greatly appreciated.

from the foreword to her book "Michigan Haunts and Hauntings":

Marion Kuclo, best known to her admiring Michigan audiences as the witch “Gundella,” has been avidly collecting supernatural tales and ghost lore for more than forty years. For some twenty-five of those years, I have has the pleasure of knowing this warm and generous lady and am among the many she has enchanted with her personality and her energy for life and all its mysteries.

Gundella has lived in Lower Michigan since 1948. As a schoolteacher for many years, she acquired a well-earned reputation for her dramatic story telling at children’s assemblies. A popular Detroit area lecturer and prominent media personality, she has known most of the local and visiting figures from the Occult World. Through her many public workshops and lectures, television and radio appearances, and her regular newspaper column (once a frequent contributor of the Detroit Free Press, the Detroit News & the Observer-Eccentric newspapers), Gundella has come to know a remarkable range of people. And through her talent for listening, she has gathered an enormous amount of our local lore. She has also been in the unique position of learning about this area’s strange events from those who sought her help in exorcising spirits and otherwise dealing with the paranormal.

Those who recall Gundella’s first collection “The Werewolf of Grosse Pointe and Other Stories” (which quickly sold out of its small 1976 printing and is now a collector’s item) will especially welcome this new collection. Not only is it more extensive in its range and coverage, but it again reflects the diligence and careful research Gundella’s readers have come to know. In this new volume, she goes well beyond simply providing us with an oral history of this region’s tales of wonder. She has carefully researched each of these stories, visiting their sites and interviewing witnesses wherever possible. This has enabled her to unearth many obscure and often fascinating details about Michigan lore that otherwise might be lost to us. Aside from being entertaining, these tales of haunts and haunting are an important contribution to the record of our cultural heritage.

Gundella brings special authority to her studies. A traditional witch, she is part of a family whose background in witchcraft (what some would call the Old Religion) extends back several generations. Initiated into a coven as a young girl in upstate Michigan, she can trace her family roots back to the Green Witches of Scotland. (She tells us that green dye was chosen by her ancestors to camouflage their bodies for secret travel through the woods for coven meetings.)

Gundella is certainly not alone in her preoccupation with “things that go bump in the night.” A 1990 Gallup poll indicated that some 93% of all Americans believe in at least one form of supernatural, psychic, paranormal or otherwise “otherworldly” phenomenon. We in Michigan are no exception. And Gundella shows us a wealth of evidence that Michigan abounds with tales of such wonders. Whether you read her stories as real proof of the supernatural or simply as wonderful examples of modern mythology, this volume will give you one of the liveliest and most romantic perspectives on Michigan that you’re likely to find anywhere.