Witch Watch: Friday the 13th unlucky? Not for this fine couple

Since it is Friday the 13th and I wore my Gundella t-shirt to my colonoscopy for good luck and am still feeling the effects of Propofol (Which made me dream about Henry Ward and the family clan, though I remember almost nothing of it because it literally felt like I was out for 2 seconds though it was likely 15-25 minutes.) here's an article on the matter.
Gundella thought nothing of the day and believed that its mystique was built upon a combination of tragic Biblical events and ancient Christian superstition which gave the day it's bad name. Most of the rest of the mentions of the unlucky aspects of 13 pointed out are the common stock variety and offer nothing really new.
Of note, and as the title alludes to, there is also a mention of a local Garden City couple, Billy and Shirley Mahs, who were engaged on Friday the 13th, married on a Friday the 13th and celebrated their 13th anniversary on one.
Then Gundella goes into a further explanation of her weight, which she often talked about openly without shame, and finished a thought from a previous column which was apparently cut off. I'll dig that article up eventually.
Lastly, there is the mention of her astrological twin that she had previously written about earlier in 1978 and will post it next.
Posted by the at 8:54 PM No comments:

Witch Watch: Druidism is not same as witchcraft

Druidism and love potions. Since, as Gundella says, not much is known of the Druids outside of depictions of human sacrifice from Julius Ceasar's accounts of them―albeit much has likely changed in the 40 years since this was written―I'll simply gloss over the topic. But love potions are another matter. Although Gundella frequently gave out the potions they almost seem to contradict her belief in the power of karma. I mean, if you're injecting something into somebody's food-stuffs that's sort of a karmic event, right? It also may be of legal consequences as well if something gets spoiled in the rendering. Thus, her advice here concerning eggs and fruit seems very non-sage-like.
Posted by the at 11:43 AM No comments:

Witch Watch: Halloween lore all can be explained

Sure Halloween lore can all be explained but there was only enough copy for Gundella to cover pointed hats, broomsticks, black clothing, cauldrons, wands and color dyes. All for practical purposes except for the pointy witch hat which evolved solely from the fashion trends of the Middle Ages. Even the princesses wore them just in a less melancholy shade. Witches wore black to move about covertly at night for fear of death. Skin dyes were merely identification markers in the same manner of the Native tribes of America. Nothing strange. As was the cauldron used practically to cook outdoors for the family without killing them with carbon monoxide. Wands and phallic symbols were more a show of ritual but since they were equated with witchcraft they had to be made into a common tool and this the duality of the wand and broomstick become one in witch lore.
Posted by the at 12:28 PM No comments:

Never say that I don't have impeccable timing. I was searching around for Gundella books and etc. and decided to see if there was anything new about her on YouTube. Lo and behold if somebody didn't post her Ghastly, Gruesome, Ghostly Tales a mere few hours beforehand.

I've been looking for this cassette recording for a decade and finally somebody has posted their copy. Gundella reads the stories that comprised Michigan Haunts and Hauntings with added sound affects and dramatic renderings including her cackles and screams.

The story The Spirits of Butler Cemetery is read in its entirety (starting at the 6:50 mark) with some minor word changes and commentary at the end including a story about a young man's death on the curve of Henry Ruff a few months after her October 1980 visit. I'll have to search around for articles during that time in the Observer and Freep.

That's as far I got before hastily scrawling this post. I've downloaded the video just in case something happens to the channel and will attempt to convert it into mp3 form for easier listening if possible.

Witch Watch: Warm fireplace drinks can ward off the chills

Gundella the Witch had the answer to the isolation blues during a faux pandemic in her Witch Watch column back in 1982: get together and drink flip.

Well, she would like never say something as irresponsible as that but herd immunity could have been met way earlier by brewing up a big cup of flip (rum, beer, sugar and egg) frothed up by a hot iron.

There are also recipes for mulled wine, hot spiced cider and coffee 'round the world included in the column. 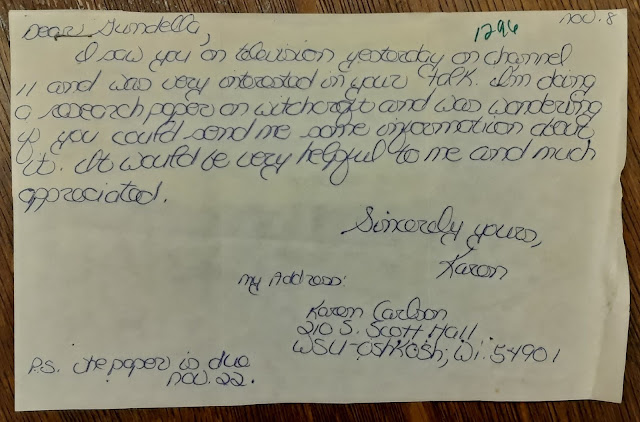 Imagine the year 1972. You're watching television and a portly witch comes on discussing witchcraft in the manner of Norman Vincent Peale's "positive thinking" seminars. No broomstick to be found and with a Yooper accent she explicates on the mind-over-matter practicality of bringing sought after things into existence by merely wishing upon them.

While in this cartoon fixation upon your television you decide to write said witch from your dormitory at Wisconsin State University and ask for information on witchcraft for a paper that you're writing for a course. Not only does she reply but sends you her personal copy of the book Witchcraft: The Sixth Sense by Justine Glass, which she doesn't totally agree with but feels sums up the tenements of traditional witchcraft better than any modern interpretation at the time. All she asks in return is that you send the book back when you're done reading it. 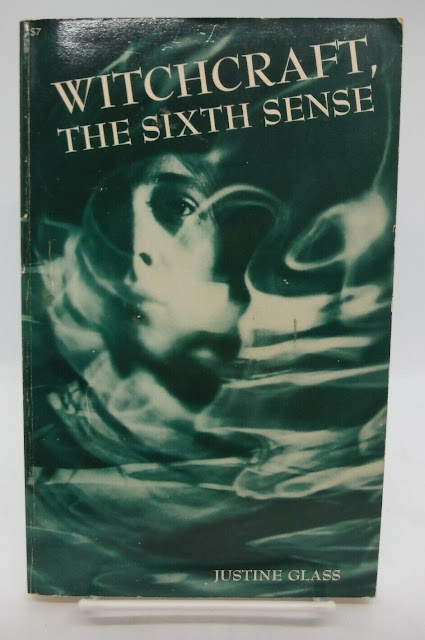 Gundella provides some interesting superstitions in this New Year's Eve Witch Watch column from 1981:
"Never say 'thank you' for a plant you receive as a gift, or it will not grow."
"Throw an onion skin into the fire and make a wish silently while it burns. Your wish will come true."
"If you are bothered by a nagging cough that just won't stop, don't worry about smoking or tuberculosis or lung cancer. Just find a nest of baby mice.
Tie them into a little bag and hang it around your neck so that the mice rest on your chest. They will absorb your cough, and when they die, you will be cured."
Posted by the at 10:46 AM No comments: