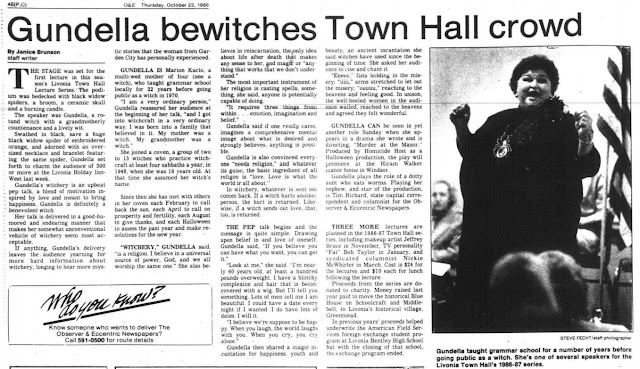 I don't know how many times news articles used "Bewitch" in some form or tense concerning Gundella but it's a bit unimaginative after a certain point don't you think? Most of this article is a rehash of her life as a witch, teacher and scant information concerning the practice of witchcraft and rituals she practices. After reading about one of her spells I was about to give up on any new information but then I read something new! Gundella believed that everybody "needs religion." Not a religion per se but something to believe in. Though she didn't expound on it the context is clear that even if you don't believe in a higher power you most likely have a passion or a core value in one thing or another that fuels your life.

Another new tidbit is that she wrote, directed and acted in a play called "Murder at the Manor". I knew she got into dinner murder mysteries as she aged and retired from performing as a witch but I don't recall her being directly involved in the creative process as well. I guess it makes sense though.
Posted by the at 6:14 PM

Labels: Livonia, Murder at the Manor