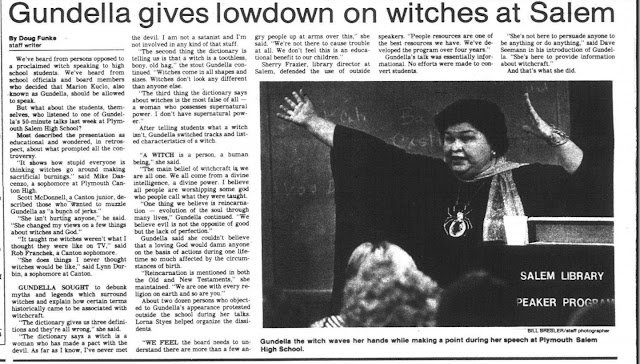 Click here to enlarge
If you've followed this blog or Gundella herself you're well aware of the controversy that sometimes followed her public appearances which included children as part of the audience. One of the most polarizing was the oft-mentioned Salem High School appearance in October of the 1985 in which she participated with other guest speakers of different faiths.

There were protests outside the school and some parents, faculty and students spoke out about the circumstances of a supposed "devil-worshiper" giving a talk to high school kids but in the end the administration allowed her speech to go on as planned. As the article explains, most of the students found the talk informational and hardly controversial. A theme that Gundella preached during her entire "career."
Posted by the at 7:50 PM

I was fourteen years old and one of the students in the library the day that Gundella spoke at Plymouth Salem, and I remember the ridiculous reaction of the hysterical parents outside the school as being downright embarrassing. The protests and prayers that took place on the front lawn while she spoke to us demonstrated to me how backwards our alleged progressive school system really was. This appearance by Gundella was essentially going to be a lighthearted Halloween-ish enjoyment for the holiday, and it turned into a negative, religious-based knee-jerk reaction that scared the school back into "safe" subjects that didn't challenge the students or make them ask questions.

The following year, when our psychology class was shown the John Hughes film, "The Breakfast Club" (followed up by classroom discussion of various scenes, to further our understanding of interpersonal communications and the characters' stereotypes), we were met with the same close-minded community reaction. Parents raised a stink, citing drug use (marijuana) and foul language in the film as making it unworthy for classroom presentation... completely ignorant that what the FICTIONAL motion picture displayed was NOTHING compared to what we dealt with in and out of school with our peers! The absurdity of the parents' protests was almost gag-worthy.

In retrospect, that 1985 film was so accurate to how we were back then that I am not only grateful for having had that study opportunity, but I think it's an absolute shame that "The Breakfast Club" was not used in other classes to further our understanding of ourselves, our time in history and our interactions with one another.

It was only later, at university, that it hit me how much these two incidents with Gundella and "The Breakfast Club" were windows of opportunities to question the establishment in which we lived, and I am grateful for them and for the teacher that introduced both challenging subjects into our curriculum. At the higher education level, you're expected to to offer opinions and to present arguments, and yet breaking out of the close-minded "banking" system of education is not just discouraged by public schools but pretty much banned. How students can be expected to succeed in life when they're not given the tools to think for themselves only highlights the ridiculousness of the community's reactions.