Gundella to speak at psychic seminar 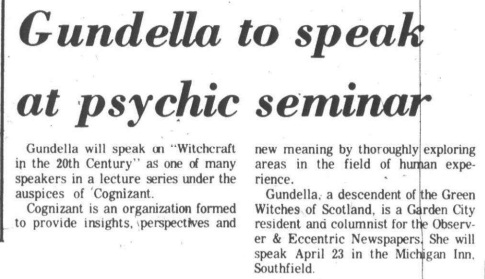 from the Canton Observer, March 24, 1975
I'm a terrible slacker when it comes to updating all 57 of my various blogs and especially when I'm unable to find new and/or exciting information concerning the subject. Not that Gundella giving a speech was uncommon but every new mention makes me feel vindicated for the long searching hours coming up with very little.

This talk entitled "Witchcraft in the 20th Century" at the Michigan Inn in Southfield was to be given on April 23, 1974. The only information for the Michigan Inn that I could find on a normal Google search gave an address of 16400 J L Hudson Dr, Southfield, MI 48075 which would be the Plaza Hotel today and that the owner, Boogie Harlow, was $200,000 in debt and that the power would be turned off at the hotel in 12 days if the bill wasn't paid. That was in March 12, 1999. From the reviews on this site it likely won't stay in business much longer! Which is a shame because up until the 1970s and '80s it was considered a luxurious hotel that often housed political party affairs and presidential stays according to old newspaper stories.
Posted by the at 2:44 PM