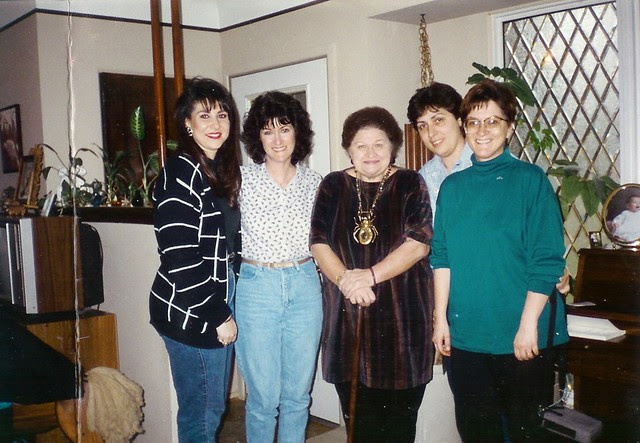 A reader of the blog, Judy K., sent me this photo along with a few handfuls of brochures, articles and more. Much of the stuff I'm familiar with from the Garden City Historical Museum collection but haven't had a chance to go back and get photocopies made so they are invaluable to me and exciting to share with everybody.

The photo above is of the sender, her sister, two friends and of course Gundella. She said the photograph is dated December 1992 and that Gundella was suffering the effects of the cancer that would take her life 7 months later but that the reading that she gave that day was very accurate as were most of her prior renderings.

As you can see she didn't live in a gothic dungeon! The furnishings actually look rather contemporary save for the dated television which by today's standards looks like a dinosaur. Gundella's ever-elusive (in photographs) but much talked about black cat of the house was present though not pictured. Luckily though, her over-sized spider brooch was present and makes for a grand centerpiece on a great photo.
Posted by the at 2:19 PM