A Victorian Shade from Michigan Haunts and Hauntings 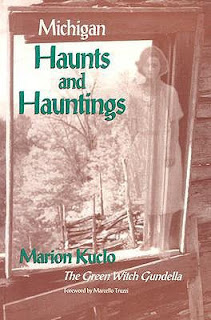 I picked this story from Marion's book Michigan Haunts and Hauntings as a pre-Halloween treat neither for its scare factor-ability nor its depth of story-telling but because it is very brief and easy to type out. It details the haunting of a house in Detroit's Indian Village by what Gundella calls a shade and not a ghost. This shade is a woman and she is in mourning. For what nobody knows but she descends the stairway sobbing and only stops at the bottom step to wipe the tears from her face before disappearing down the hallway towards the butler's pantry.

One of the seances mentioned in the story was conducted by Gundella, and covered by the Detroit Free Press Weekend Magazine in a 1983 article which I have previously posted, but it proved unsuccessful as apparently have all such conjurings within the house. Within the story there are other mentions of incidents besides the crying woman. It's a decent read with a rather blah ending but Gundella wasn't about to host a sham seance where voices and trumpets screamed out into the silent darkness.

I read on a haunting website that the woman supposedly died in a fire but there was no source given for that notion.

On the lower east side of Detroit, not far from the Belle Isle Bridge, stands a neighborhood of beautiful historic homes known as Indian Villiage. One of these houses, a fine old Victorian mansion from the 1890s, is haunted. Not by a ghost, but by a shade.

An attractive woman about 40 years old with thick brown hair pulled severely back and twisted into a knot at the back of her neck suddenly appears at the top of the stairway. She is wearing a tight-waisted long grey dress with a white collar and white cuffs. She is crying mournfully into a blue lace handkerchief. Slowly she descends the stairs and stops for a moment at the bottom step to wipe her eyes. Then she abruptly turns to the right and walks down the hall to the butler's pantry where she disappears.

Over the past 27 years (and perhaps much longer), everyone who has lived in that house on Seminole Street has seen her as have many of the guests who have visited the house. Who she is, why she is crying, and what has become of her, no one knows. She never talks.

Attempts to communicate with her through seances always fail, for she is not really a ghost. She is a shade acting out a scene from the past, a scene destined to be played out for all eternity.
Posted by the at 2:01 AM