Do loonies come out with the full moon 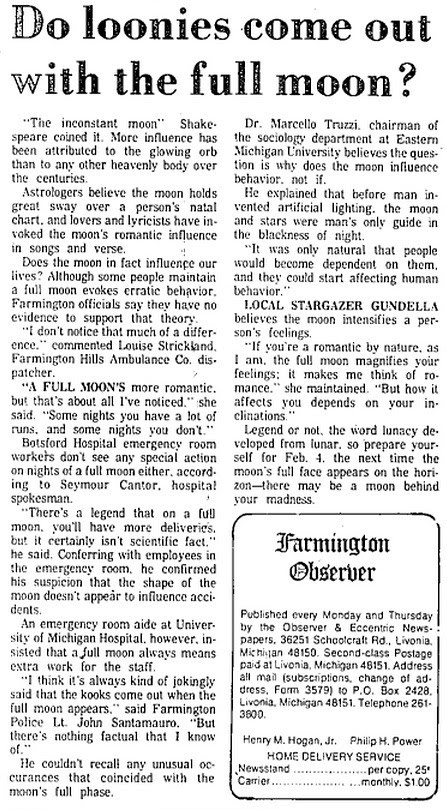 from the Farmington Observer January 24, 1977
But of course they do! Notwithstanding the fact that crazy people come out every night regardless of the moon's present phase. Yet, the ancients believed not only that the moon affected the mad but they coined a word, lunatic (Middle English lunatik, from Old French lunatique, from Latin lnticus, from lna, moon; seeleuk- in Indo-European roots.) to describe the affliction based directly from the root word luna, or moon.

While modern studies poo poo the notion as being rooted more in superstition than actual scientific fact, some suggest that the full moon provided a light source during the dark nights that caused sleep deprivation and thus temporary psychosis in some. Of course, modern man has the luxury of electrical lighting at his disposal so naturally the results may be unfairly skewed based solely upon environmental conditions moreso than  biological impulses.

Either way it's an interesting topic and luckily the Observer was good enough to interview that renown local "stargazer" Gundella and share with us her thoughts on that most psychotic of human emotions: L-O-V-E.
Posted by the at 12:35 AM