from the Farmington Observer October 30, 1975 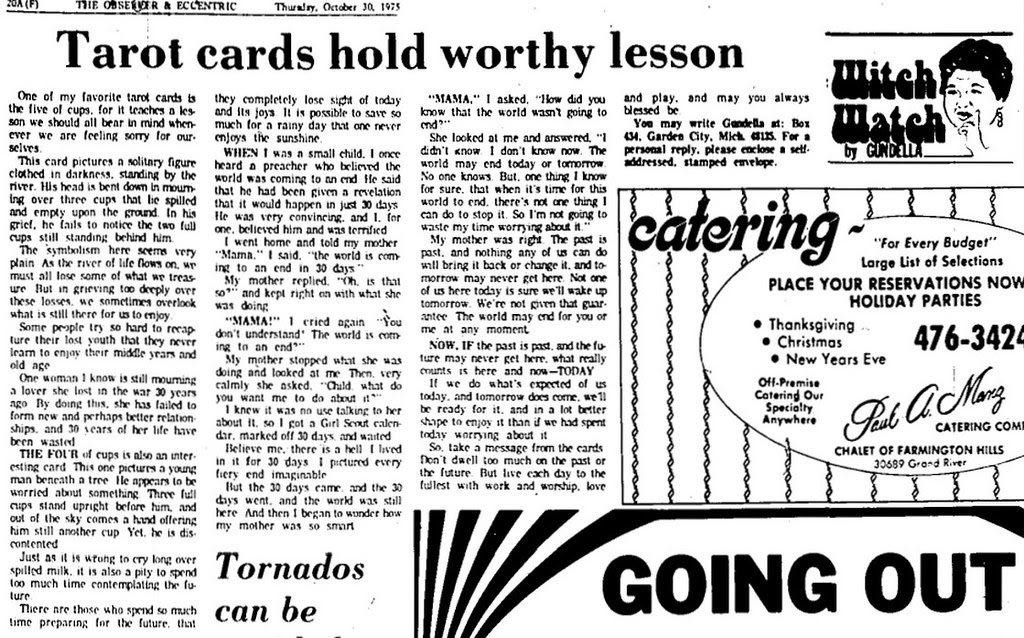 Click here to enlarge
Live for today and prepare for tomorrow is the message Gundella spreads with this tarot card article and you can't really find fault in it. I'm not much of a "pep talk to feel good about yourself" kind of person but sometimes common logic and wise words aren't always an introspective option and an outside force churning the thought in your head can be very beneficial.

However, it does seem a bit counterintuitive to say "don't worry" but then go ahead and get a tarot reading. Not that I'm suggesting that Gundella believed that you should guide your life via a deck of cards -- and most likely she took a light-hearted approach to the practice as more fun than prophetic -- but it does seem to offer up clashing ideas on the subject.

Nonetheless, I like the column because it tells another personal story which is also very interesting and tragically cute. It's a story that exhibits the frailty of the adolescent human mind which is not only filled with great wonders but also many terrors as well. Being a sentient being has many advantages in terms of physical comfort and pleasure but that can easily unravel in the hardship of knowing ones mortality is as certain as it is fleeting. It's not hard to understand why religion is such a popular salve.

As for myself: I've never had a reading and perhaps I need one. Oddly enough many people have told me in casual conservation that I would live to a rather old age (in my 90s). I was never one to care much either way until I had a daughter and now I'll gladly accept those terms just so long as it's to see her thrive and blossom. Yeah, I know, I don't get to choose. Well, you can't stop me from trying.
Posted by the at 10:51 PM