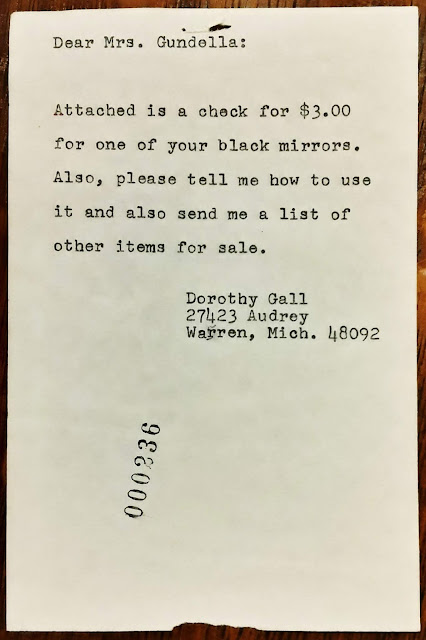 Weariness has caught up with me but not enough to stop me from taking 990 more photos of the Gundella Letters yesterday. Which equated to about 600 more letters (sequentially speaking anyway though I suspect that there are some missing from the folders). Since I haven't had time to look at anything other than these letters it's all that I have to post.
I'd never heard of a black mirror before seeing this letter so I Googled the term and here's what I came up with:
"The black mirror is a powerful divination and visioning tool, revered for centuries for its ability to penetrate the veil between worlds. Mirror gazing, or scrying, is an ancient art for making contact with the dead, opening the gates to the angelic realm, seeing into the future and past, and seeing distant locations. All kinds of shiny surfaces have been used as tools, but the black mirror stands above them all. This complete and concise guide covers the history of black mirrors and scrying, and famous people who have relied on mirrors to reveal secrets and truth. It explains how black mirrors work in psychic seeing, and gives detailed advice on how to use a black mirror for talking to the dead, exploring the astral plane, discovering past lives, expanding your spiritual knowledge, and much more. Follow in the footsteps of history’s great alchemists, mediums, and sages, such as John Dee, Queen Elizabeth I’s royal astronomer, who used scrying to contact angels, and Nostradamus, the famous French seer whose prophecies reached far into the future. I have been an avid reader of Rosemary Ellen Guiley’s work for over 25 years and this book is one of her best yet! She takes you on a journey through the dark mirror to make contact with the spirit world, develop psychic skills, explore your past lives, and uncover hidden truths. With her direct, no-nonsense style, Rosemary packs this book full of the information you need to master the use of this ancient visionary tool!" -- Christian Day, author, The Witches’ Book of the Dead
I've contacted the person named in the letter, which I won't post here, and hopefully she (if it's her) can shed a little light on these $3 black mirrors that Gundella was selling around 1972.
Posted by the at 6:06 PM