Since I'm likely going to EMU today to gather some of the Gundella letters so as not to overburden my "colleague" (as the librarian referred to my co-worker in an e-mail; laughably since I'm a colleague to only circus clowns and even that is an insult to the professionalism of said clowns) I'll share one with you, even if you don't want it. 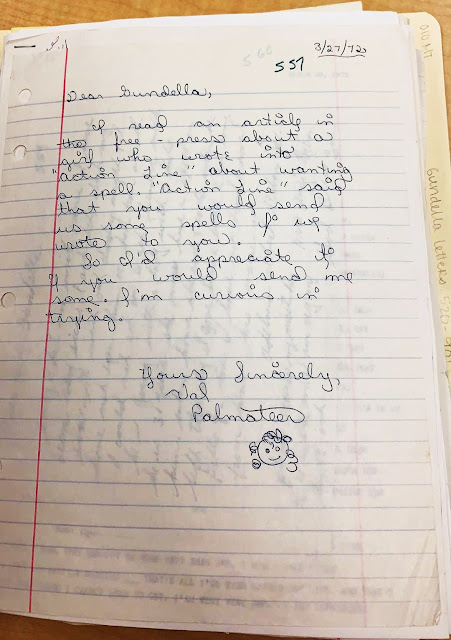 It's from Val Palmateer and she was responding to a Free Press "Action Line" segment in which a reader asked for a fictitious spell conjured up by Shakespeare. Gundella responded by saying that although there is no magic involved in casting spells, but rather pure psychological application, she would send a spell to anybody who wrote her.


3,000 or so letters later a follow-up column appeared. The Freep took it so serious that they placed it on the comics page. Nonetheless, it discusses the fact that her friend Marcello Truzzi, who cavorted with Anton LaVey and witches from the area, had been studying her letters for 3 years. Which would probably tie into the time frame when he earnestly began studying witchcraft and published his book on the matter "Caldron Cookery" in 1969. Which is available in its entirety as a FREE e-book on this blog as are Gundella's two books.

The early letters stem from appearances on the Bill Kennedy and Lou Gordon television programs where some were even read.

Truzzi and Gundella worked on a book of psychic phenomenon and witchcraft together but it was seemingly never published. Some or all of the 1972 letters are collected in the Truzzi papers at EMU.