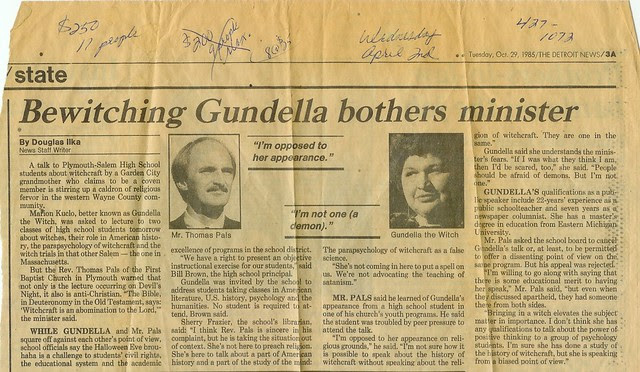 Click here to enlarge
Another kind donation from Judy K which deals with a minister who was bothered by Gundella. Ho hum. How many does that make now? This one is actually related to a previously posted article in the Wall Street Journal and a mention in the Michigan Librarian. Gundella was protested at Plymouth High School because of her appearance in several classes on the history of witchcraft and it's validity as relates parapsychology.  Mr. Pals' objection is that there would be no equal representation and the lesson would be taught from a biased point of view. As Gundella retorted and most of us, including the then school board, believed, "If I was what they think I am, then I'd be scared too. People should be afraid of demons. But I'm not one."
Posted by the at 8:21 PM